There is No Such Thing as "Tone Deaf" 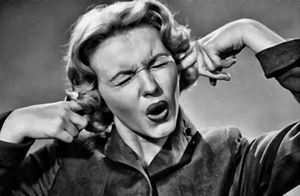 No matter the style, the setting or the performer, pitch is something everyone struggles with from time to time.

There are many complicated definitions of pitch as it relates to sound frequency but at its simplest definition "pitch" is defined as "the quality that makes it possible to judge sounds as "higher" and "lower" in the sense associated with musical melodies". Now that is a very broad term... "higher" and "lower" and there is a LOT of wiggle room separating one note from another. It is a difficult thing to define but man oh man do we ever know when it isn't on.

Pitch is something a singer must be vigilant about because we are human beings and can all have moments where support, concentration or attention can falter. In one moment a single note's pitch can move either higher than intended (sharp) or more commonly lower (flat). The result is a slight sourness that interrupts the flow of the song and can really break the mood.

I have come to believe in my 25-year singing teaching career that there is no such thing as "tone deaf". I believe that lack of reliable pitch is a fixable problem caused when the synapses that happen almost instantaneously between the ear, the brain and the vocal folds is sluggish in some people. Unfortunately, these same people have most helpfully been told by others that they should just "never sing" and that they can't do it. This belief system is false and sets them up for failure rather than giving them the synapse-building tools they need to correct the problem.

Through a specialized  program I've developed over the last several years teaching vocal control, I am confident that I can get anyone to sing on pitch so long as they have properly functioning vocal folds and lungs. No matter the age of the student or the style of music they want to learn, we can achieve success in singing on pitch together.

Don't misunderstand me though... this process takes a LONG time to correct but I have helped several motivated students do it. Time, skill and commitment is what it takes to gain the necessary control for anyone to sing on pitch.